I have a stack of medals hanging off my shelf from various distant running races that I have done over the years and guess what? I did not win first, second, or third place in any of those races. Perhaps not even in the top 100, yet I was given a medal of participation in every one of those races.

The Apostle Paul gave an analogy of running the race of faith in 1 Corinthians 9:24-27

“24 Do you not know that in a race all the runners run, but only one gets the prize? Run in such a way as to get the prize.25 Everyone who competes in the games goes into strict training. They do it to get a crown that will not last, but we do it to get a crown that will last forever. 26 Therefore I do not run like someone running aimlessly; I do not fight like a boxer beating theair. 27 No, I strike a blow to my body and make it my slave so that after I have preached to others, I myself will not be disqualified for the prize.”

In our sport-obsessed culture, it may be easy to misinterpret the meaning of these verses based on what the expectations of modern-day athletes are: teamwork, determination, and sacrifice. Some of us may have participated in 10Ks and marathon races, while many simply enjoyed sports from the comforts of our couches. In either case, we often read these metaphors from Paul’s letter to the Corinthian church and casually interpret them according to our own experiences and emotions. However, while Paul may be proposing something that is analogous to our current sports culture, we must be careful not to overlook the bigger picture that is being presented.

We have all partaken in thespectacle of the recent Olympic Games celebrating competitors who finish in the top 3 to earn a gold, silver, or bronze medal. In Paul’s days, there are no medals for those who merely finish the race but only for the first to cross the finish line. In verse 24, Paul begins with the rhetorical question about the single victor in a race. In our race of faith, Paul is encouraging us to strive to be like that victor – not with the aim of achieving results as much as the manner that we should run the race in.

We read in verse 25 that it is not the runner’s prize that really manners – the winner’s crown is a mere shadow of the imperishable crown that we are to strive for. Instead, Paul is highlighting the fact that “everyone who competes in the games goes into strict training.” Self-control and self-discipline are at the centre of Paul’s instruction for the Christian “athlete” who ought to train with a purpose in mind and not without aim (purpose) as a boxer looking to strike empty air.

The purpose of our faith race is to exercise self-control and maintaining a way of life that aligns toward one purpose – the proclamation of the Gospel!

Christian living involves preparing ourselves for a life defined by the sharing of the Good News of Jesus through self-control and discipline. That self-control extends not only to our deeds, but also our speech (both in person and online via social media posts etc.).

Note that these verses come right after Paul’s reflection on his “rights” as a bearer of the Gospel message and how he chose to give up his entitlements for the sake of others (1 Cor 9). The athletic imagery that Paul provides here is meant to help the Corinthian believers understand the value of self-denial for the sake of becoming “all things to all people (v.22).” That same exhortation is just as applicable for believers today.

As with most familiar things, we must be carefulnot to read “all things to all people” as though Paul is saying that “everything goes” because outside of this text, Paul explicitly says that theological relativity and idolatry are not part of the Gospel (1 Cor 10:14-22). Paul is stressing that he has given up his claims to his own rights, but not the truth of the gospel for the sake of winning more people to Jesus. In the full context of the chapter, we see that Paul is not advocating for us to take pride in self-seeking motivation for heavenly rewards. Instead, we are to be motivated by the joy from serving Christ and serving others, to the point of denying ourselves the freedom of personal choice and entitlement.

We may have the freedom to do so, but we CHOOSE not to in order to serve/save others.

In that sense, the wider context of Paul’s letter is all about UNITY. Theathletic metaphor is not meant to highlight the athlete, the discipline, or the personal achievements so much as the collective purpose and motivation behind the effort. Athletes compete for themselves, but the win is celebrated by the nation (kingdom) they represent. The athlete in Paul’s metaphor does not strive for his or her own sake but for the sake of God’s call to God’s people and in building God’s Kingdom.

We see this example in the podium sweep of the Women’s 100m sprint race at the 2020 Olympics by a trio of Jamaican runners with Elaine Thompson-Herah, Fraser-Pryce, and Shericka Jackson taking gold, silver, and bronze respectively. 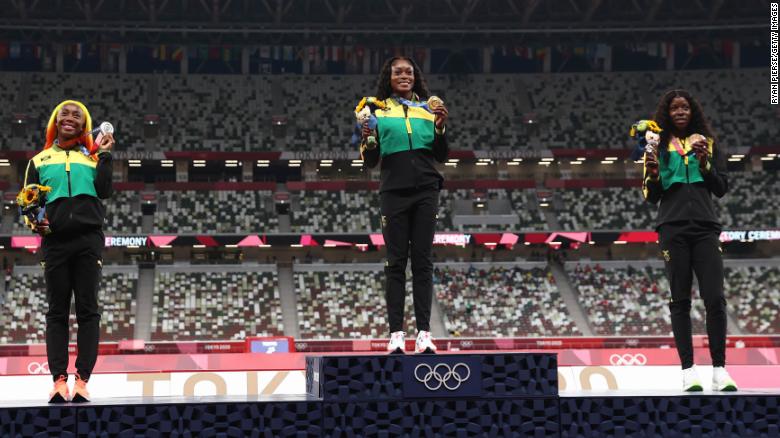 In an interview with CNN, Fraser-Pryce, who crossed the line 0.13 seconds after Thompson-Herah at the women’s 100m final, admits that there’s a fine line between wanting to win medals for your country versus yourself. She recognizes that their competitive desire to beat each other has elevated them as a team.

“I think it’s normal to be competitors and understand that we all want to win. We want to go out and want to run our best race,” Fraser says. “So you still have to take what you can from it, even in your disappointment, you have to take the good from it. I don’t think there’s any hard feelings.”

“If you have competitors that continue to push you, then you’re able to get to the target that you set for yourself as well,” she says. “If I’m lining up at the line, I want to line up with my fiercest competitors […] I can’t make any mistakes because I have to be ready to perform under pressure.”

The trio hopes that with their collective achievement, they could inspire a generation of young Jamaicans to replicate history once again.

“I’m just excited for all of us and what it means for the young girls back home,” Fraser-Pryce says. “I think it speaks to just the dominance and the legacy that we have in Jamaica. And I’m hoping that it continues for years to come.”

In this season, who is running alongside you in the race of faith?
Life Group is a great place for faith training partners if you have not considered joining yet.

In this season, who can you invite (in-person or online) to the next Coastal Church event?

At the end of the Day, the medals that we have hanging from our heavenly shelves will not be given according to our earthly wealth or our worldly achievements, instead we are rewarded by the influence and impact that we make in helping others know about Jesus and inspiring them to race for the eternal crowns that they too will have the opportunity to receive for generations to come.